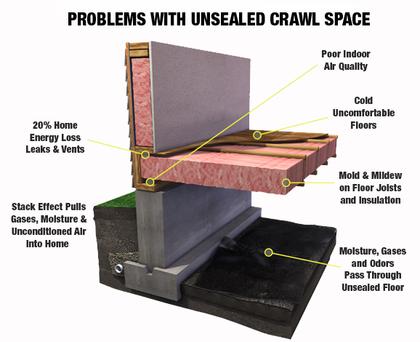 Making a crawl space part of the building envelope stops air leaks, moisture and gases from entering the living space of your home and improves comfort and efficiency.

There is a problem with a dirt floor, vented crawl space...as air rises in a home, it carries with it the air that was previously in the crawl space. That includes moisture, mold spores and soil gases, as well as anything else that may be airborne down there. As this air rises in the home, replacement air is drawn through the vents. This replacement air is made up of unconditioned outside air that enters through vents and other leaks. This natural upward air movement is called the "stack effect" and makes heating and cooling your home more difficult and inefficient.

Traditionally, crawl spaces have been vented to prevent problems with moisture as many building codes require vents to aid in removing moisture from the crawl space. However, green building professionals now know that sealing crawl spaces is the best option for homes as you seal out moisture, soil gases and air infiltration by making the crawl space a part of the building envelope.


If you have an ventilated crawl space, your best approach is to seal and insulate the foundation walls and never the subfloor. The advantages of insulating the crawl space are:

• You can avoid and control the humidity, comfort, gases and efficiency problems associated with a ventilated crawl space.

• Piping and ductwork are within the conditioned volume of the house so they don't require insulation for energy efficiency or protection against freezing.