All buildings are subject to something called the "Stack effect". When a building has openings, cracks, or ventilation at the top of the building, and similar ventilation at the bottom, there can be air movement either up or down, through the building. When the outside air is colder (denser) than the inside air, the flow goes out at the top, and in at the bottom. The reverse is true when the outside air is warmer than the inside air.

One common area for air to come in, low on the house, is in the basement where your first floor meets the basement foundation walls. When you are in the basement looking up, you can see floor joists running across the basement ceiling. Capping those off around the perimeter of your house are rim joists. The sill plate is what those two pieces sit on.

Though you may not be able to see cracks in the rim joist cavities, it is best to seal up the top and bottom of the inside of the cavity. Also, rim joist air sealing is especially important at bump out areas such as bay windows and cantilevers that hang off the foundation. These areas provide greater opportunities for air leakage and heating and cooling loss.

The lower level of your home including the basement, rim joists and cantilevers must be sealed to stop the stack effect. 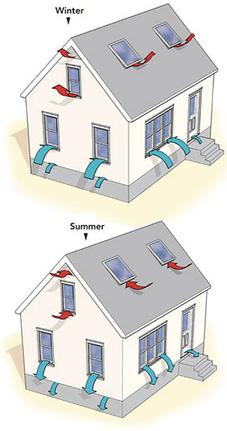